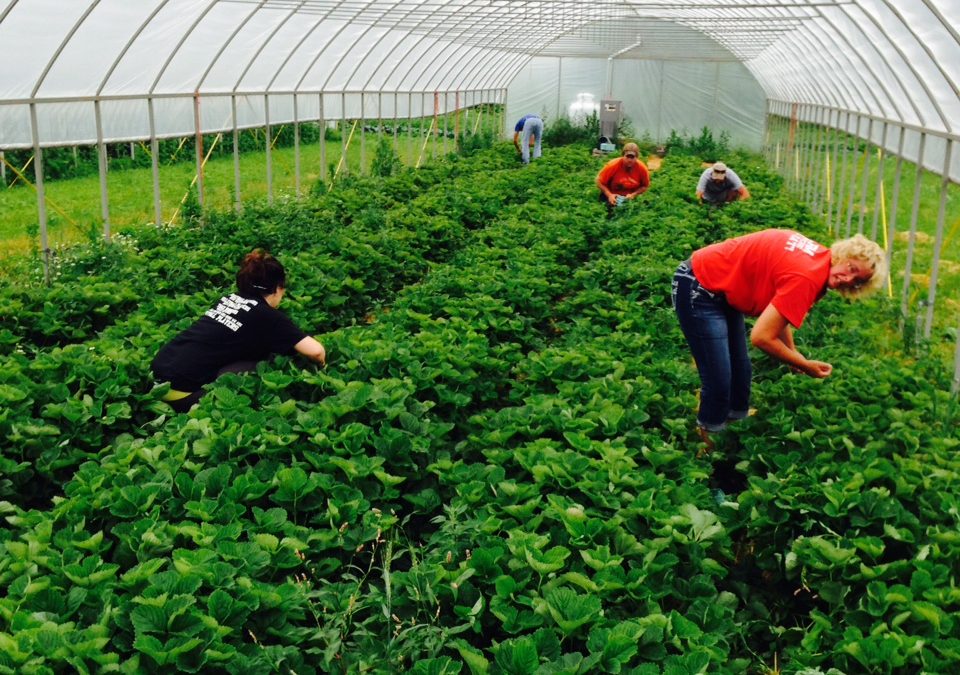 We took a drive out to Stymus Farms on a cloudy day in late June to talk with Ed Stymus and his grandsons Trevor and Cody. The Stymus’ have been farming their land since the 1920’s and are now in their 4th generation of farming.

The rain was falling on and off as we took a walk around the farm, which is 500 acres; they farm 250 of those acres. We passed row after row of lettuce, Swiss chard, and kale greens, and seemingly endless varieties of vegetables including snap beans, sweet peas, kohlrabi, and beets, before ducking into some ‘cold frame’ tunnels. The tunnels housed strawberries, tomatoes, cucumbers, gherkins for pickles, zucchini, and several varieties of herbs, and greens.

The cold frame tunnels we learned intensified the heat. Each one also was equipped with a small furnace. The furnace was used early in the season when the planting started, while the days were still cold (and sometimes later on those surprise Western New York weather days when the temperature took an unseasonable turn.) We marveled at how the cucumbers and gherkins grew — they were tied up on wires so they grew upward. Ed explained that once they hit the ceiling, they’d grow right back down to the floor (end-to-end that’s about 16’ of cucumber vine).

The boys explained how they try to keep on top of trends and are always trying out new crops. Last year they planted chocolate mint, which ‘jumped the pot’ and now had its own little ‘expanding’ garden. (Anyone who has ever planted mint, knows how this goes!) This was the first year they planted red romaine lettuce and strawberries, of which they had already harvested 400 quarts with hundreds more to be picked.

We definitely saw that growing things takes a lot of work and attendance. Seeding starts the process and once seedlings sprout, they are transferred to pots; once the seedling plants are sturdy enough to be outdoors, they are planted in the fields. That’s when the real work begins. Everything is weeded, maintained, and harvested by hand — rain or shine. And it’s done in rotation, to provide a constant flow of produce to customers of The Market.

Before we left, we took a drive over to another section of the farm where corn and potatoes were growing. In addition to all the work that goes into planning, planting, and maintaining, “You also have to be a bit of a watchdog,” Trevor chuckled as he told us. “People sometimes think that they can just stop and pick a thing or two when they are driving by.”

We left knowing one thing for sure, farming is round-the-clock hard work.

We revisited the Stymus farm in late July to see what else was growing in their expansive fields. There were some of the earlier July crops that were still being rotated in, but what we saw this time was different.

The crops that were in the cold frame tunnels were done, and at least for now, nothing was growing in them. We saw some beautiful early peaches, which were the size of baseballs on the trees near the front barn. As we walked by we had to be cautious of the nest of honeybees near the barn. Peaches aren’t a main crop for them, but they sure looked fantastic.

We looked at row after row of melons and squash. There were so many varieties, we lost track after a while. The ‘blue hubbard’ variety we were told, would grow to a size larger than a watermelon; wow.

They had a small patch of okra and some very unusual tomatoes. The tomatoes, a new crop for them, were shaped like strawberries and aptly named ‘tomato berries.’ We sampled some…they were as delicious as they were interesting.