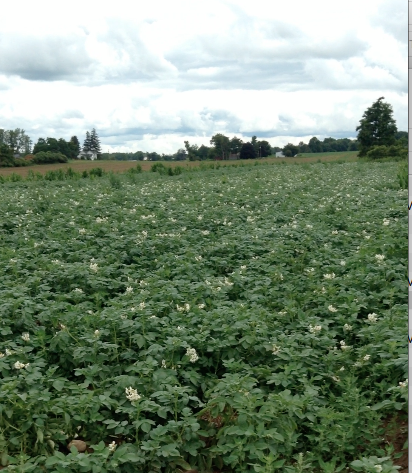 We revisited the Stymus farm in late July to see what was growing in their expansive fields. There were some of the earlier July crops that were still being rotated in, but what we saw this time was different.

The crops that were in the cold frame tunnels in July were done, and at least for now, nothing was growing in them. We saw some beautiful early peaches, which were the size of baseballs on the trees near the front barn. As we walked by we had to be cautious of the nest of honeybees nearby. Peaches aren’t a main crop for them, but they sure looked fantastic.

We looked at row after row of melons and squash. There were so many varieties, we lost track after a while. The ‘blue hubbard’ variety we were told, would grow to a size larger than a watermelon; wow!

They had a small patch of okra and some very unusual tomatoes. The tomatoes, which were a new crop for them, were shaped like strawberries and aptly named ‘tomato berries.’ We sampled some…they were as delicious as they were interesting.

Potatoes are one of the main crops for Stymus. On our June trip, we saw the beginnings of the potato crop. On this trip, the potatoes were nearing harvest. Did you know that white potato plants have white blossoms and red potato plants have purple blossoms? We also learned that the threats they faced growing potatoes are deer beetles and sunscald, which actually changes the taste of potatoes (making them bitter). Sunscald was also a threat to another of their main crops, tomatoes, reminding us of the uncertainty farmers face because of the weather conditions.

We love talking to the farmers because there is so much to learn. Another interesting fact — purple peppers (they also grow green, red, yellow, jalapeño, and hot habanero peppers) start out green, turn purple and then go back to green when mature. Who knew?